The Problem With Paleo 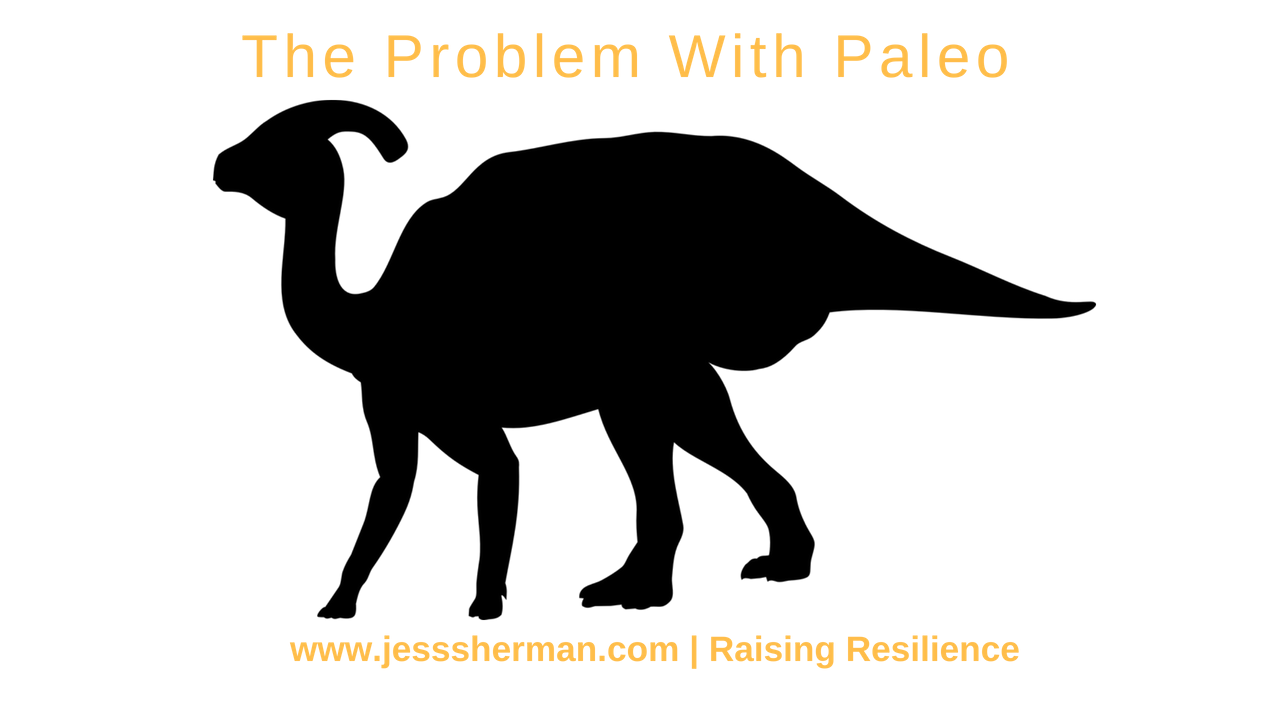 The simplest definition of this diet strategy is to remove grains, dairy, and legumes and focus instead on meat, seafood, fruit, vegetables, nuts, and seeds.

I find Paleo to be helpful for children who struggle with self-regulation issues, particularly kids on the Autism spectrum.

But Is A Dairy-and-Grain Free Diet Safe For Kids? What's The Problem With Paleo?

I see this kind of diet stabilizing mood, energy and blood sugar; it can help relieve digestive distress and ease inflammation. When we reduce inflammation, we see focus and sleep improve, learning and growth improve, and we often see emotions and mood stabilize.

But if we going to do Paleo, we need to do it safely. So in this post I'll address the most common concerns I hear from parents and offer solutions.

The risk of nutritional deficiency is the number one concern I hear from parents about Paleo.

It's a valid concern and one to think about any time you consider taking whole groups of food out of a child's diet.

Kids are in a stage of rapid of growth and require massive amounts of nutrients and energy in a steady supply. Nutritional deficiency is certainly a potential with Paleo.

Before we get to specifics of how to avoid nutritional deficiency on a Paleo diet, there's an important mindset shift to consider.

Most people think of Paleo as an elimination approach – we are removing foods, period. When you take that approach you open yourself up to nutritional deficiency.

When you think about it that way, you can do Paleo safely with your kids and see the benefits while avoiding the risk of nutritional deficiency.

Here are FIVE potential nutritional problems with Paleo (and how to avoid them):

I want to highlight five nutrients I am most concerned about when people take out grain, dairy and legumes: Fibre, Folate, B12, B6, Calcium.

I'm focusing here because the Paleo no-no’s (like grains, legumes and dairy) are handy sources. They are also critical for neurological health and development – the very things I’m trying to help parents improve.

Because of their importance to the developing brain and body, I sometimes recommend that certain specific beans remain in the diet for children on a Paleo approach, even though traditionally they are left out (they're listed below).

On occasion, I also recommend that some of the seed-like grains such as quinoa remain in too. But it all depends on the individual.

Here are foods to focus on to avoid these potential nutritional pitfalls of Paleo with kids (keep in mind, some of these foods are not traditionally allowed on the paleo diet. I include them because they are handy sources. Whether your child can handle them might require some trial and error).

Same as that listed for B vitamins as well as:

Folic acid is added to most grains, by law, as fortification (particularly wheat and corn, and it's not always indicated on the label).

An estimated 50-60% of us do not metabolize this folic acid well and are unable to use it due to our genetics (in the autistic population that percentage jumps to 98%!).

For these people, the synthetic folic acid they get from grains clogs up the folate receptor sites, reducing their ability to absorb natural folate and effectively causing folate deficiency.

Replacing fortified grains with the sources of natural folate mentioned here frees up the receptor sites while offering the body a more useable form of folate. The ability to improve folate absorption might account for some of the benefits we see in kids when we remove synthetically fortified grains.

Concern #2: There Is Too Much Animal Protein In A Paleo Diet

We do have some good research to suggest that a diet high in animal protein and animal fat that is also low in plants and fiber can adversely affect gut microbes (then again, so can gluten).

If you’ve been following my work you’ll know that I’m all about supporting gut microbes!

This concern about the effect of animal protein and fat on microbes is, I think, valid. And it leads us to a very common pitfall with Paleo…. Don’t Forget The Veggies!

Vegetables contain protective nutrients that are a critical part of making this diet approach healthy for kids.

More and more human studies are being done looking at the effect of a Paleo-type diet on weight, metabolism, immune function, neurological processes and heart health that show us this way of eating can be very healthy. But it has to be done in a healthy way if you're going to try it and that means, in part, lots and lots of vegetables!

Concern #3: Paleo Is Too Restrictive. Gluten-Free Is Enough

Gluten is a type of protein found in grains. Wheat, rye, barley, spelt and kamut are commonly thought of as “the gluten-grains”, while grains like rice, millet, teff, quinoa, sorghum, and buckwheat are considered "gluten-free grains".

Many of the children I work with have been found to be gluten sensitive – either through testing or through careful tracking of symptoms. It's not that surprising, since gluten is hard to digest and has been associated with over 200 medical symptoms and conditions including some cases of ADHD, anxiety, depression, autism, and autoimmune diseases.

Gluten has also been shown to potentially interfere with nutrient absorption, and many of the kids I work with show symptoms of nutritional deficiency.

So, is it enough to just take out the grains that are high in gluten? Do we really have to take out all grains?

The answer is, it depends.

Some kids can tolerate gluten-free grains like quinoa and rice, but some only see benefits when they take out all grains.

2. Other potential issues with grains, other than gluten.

Food chemicals like phytic acid, lectins and glutamate can also irritate the digestive and nervous system, as can the pesticide glyphosate, which is sprayed on most non-organic grains before harvest. Perhaps it is the reduction of those things when a child goes on a Paleo diet that accounts for the improvements in symptoms, not the gluten at all.

So, Where To Start?

I have seen remarkable improvements in kids when they follow a Paleo diet. Children who struggle to self-regulate benefit when we reduce irritation. Doing so makes room for positive momentum by re-establishing nutritional status and allowing for digestive regeneration. The are many possible ways a Paleo diet can reduce irritation.

But Paleo can seem daunting, especially if you're not comfortable in the kitchen. Diet changes have to be more helpful than they are stressful, so if you're considering trying a Paleo diet, be sure to plan ahead and get support if you need it.

In my coaching programs, I always start families off with a nourishing, whole foods diet. I strongly believe that it's important we start from a perspective of nourishment before we consider taking anything out of the diet when it comes to kids. If your child is not yet eating a wide variety of whole foods, and you're not yet comfortable cooking them, that's the place to start.

Where we go next is going to depend on the child and the family. But when it comes to gluten and grains I generally start families off with a healthy gluten-free diet and then gently move them towards a modified paleo diet, being careful to keep it nutritionally dense.

We stick with that for a trial period while carefully tracking symptoms and working on digestive regeneration and, at some point, we typically enter a re-introduction period.

Again, this is going to depend on the individual situation.

The Bottom Line....Think About Concepts, Not Protocols

Let’s ditch the word “Paleo” and focus on your child, ok?

When trying to figure out what and how to feed your kids it’s more helpful to think about concepts than to adhere to a particular defined protocol.

Your child is an individual. With individual needs.

I find that a Paleo-type diet that removes dairy and grains (and any other allergens you’ve discovered) while heaping on the plants, quality meat, fish, and eggs along with select beans and sometimes pseudo-grains (like millet and quinoa) can be a great diet for kids who are struggling with self-regulation, learning, focus or growth.

What's most important, if you try Paleo with your kids, is that you still follow the Pillars Of Resilient Health . Your child's diet still needs to be full of good nutrition, you still have to explore all types of irritation (beyond dairy and grains), you still need to feed your child for blood sugar stability, you still need to do some digestive regeneration and support. A Paleo approach can help, but it's not the end of the story.

2011: Association of Attention-Deficit/Hyperactivity Disorder and Celiac Disease: A Brief Report

2012: Molecular and Immunological Characterization of Gluten Proteins Isolated from Oat Cultivars That Differ in Toxicity for Celiac Disease

We'll send you our Quick Start Summary that outlines what to focus on. Then we'll start to fill your toolbox with do-able strategies